There have been times when I just want to not respond to WhatsApp messages and emails, and stay away from social media. On multiple occasions, the thought of cutting all my ties with a smartphone has crossed my mind. But switching to a feature phone entirely is not an option for someone like me in the news business. However, recently, I started an experiment of using the reimagined Nokia 6310 during my morning walk. The idea was not to give up on my smartphone completely, but to use a feature phone for a specific time in the day when I need to take a break from the hyper-connected world.

If you want to rethink your relationship with the smartphone, you can try what I did with the Nokia 6310.

The original Nokia 6310 came out in 2001. I got my first tryst with the classic phone three years back when I spotted the device at a vintage shop in London. The updated version of Nokia 6310 brings back memories of the original model which had a cult following during the Heydays of Nokia. Its reboot, made by HMD Global which licenses the Nokia brand, takes some design elements from the classic phone and remodel it for the newer generation.

The new version has a bigger screen, a slightly different layout of the buttons but the same long battery life and solid build. The reimagined Nokia 6310 has classic appeal and it is impossible to ignore this device in dark green. The top half has the gold frame accent surrounding the screen and the navigational pad and the bottom half has a numeric keypad.

I am a sucker for retro products and holding the Nokia 6310 feels divine. Unlike smartphones of today that have uncanny design similarities, the Nokia 6310 has a timeless design – an identity of its own and that would influence gadget lovers for many years. In short, the Nokia 6310 is well built and handsome.

On the outside, the Nokia 6310 has a 2.8-inch screen. On the bottom, you’ll see a 3.5mm headphone jack and a micro-USB charging port. It has a 0.3-megapixel camera on the back along with a flashlight. The Nokia 6310 is amazingly light and I loved the more pocket-friendly shape. You probably won’t even know it’s there. 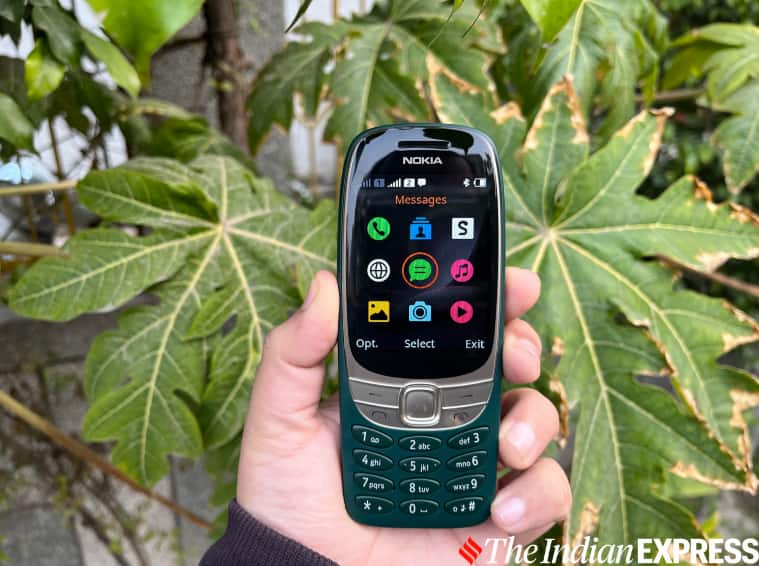 Obviously, there is no water resistance, but the back cover is removable which hides a removable battery, a dual-SIM slot and a MicroSD slot for up to 32GB of extra storage. Don’t be surprised to see a miserly 16MB of built-in storage. If you plan to listen to MP3s, which I did, buy a 16GB microSD card. It will cost you under Rs 300.

The phone uses a 2.8-inch QVGA screen with a resolution of 320 x 240 pixels. Icons are big and reading text messages on this tiny screen is acceptable. You can change the wallpaper, adjust the font size, as well as change backlighting time. Below is a navigation toggle and central OK button.

The backlit keys on the dial pad are large and flush. Texting and calling worked fine. Those who are acccustomed to using a modern-day smartphone may feel irritated typing on this keypad. I can type much faster on a touch-screen keyboard, but the reality is the Nokia 6310 isn’t made for browsing the web or WhatsApp (ing). 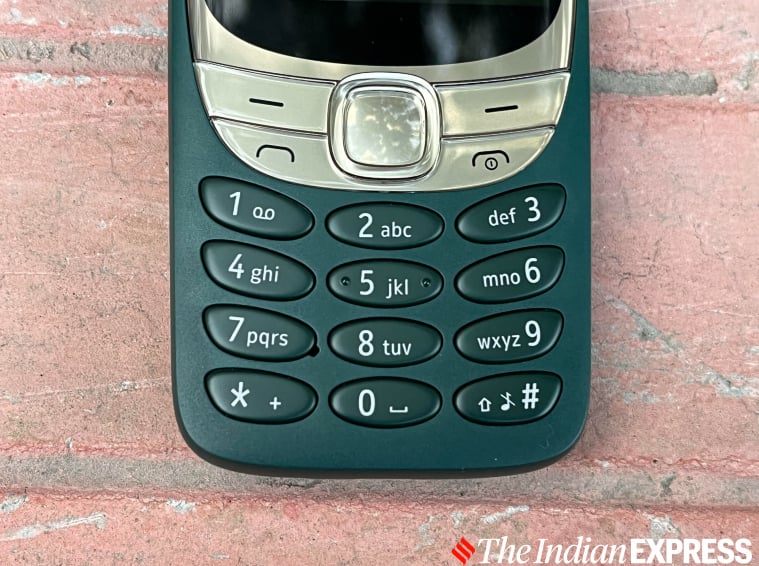 You will find a slightly different layout of the buttons on the new Nokia 6310 compared to the original phone. (Image credit: Anuj Bhatia/Indian Express)

The Nokia 6310 is a basic phone and its comparison to a smartphone is unjustified. I use my iPhone 13 mini as my daily driver and this Nokia 6310 is a device that I carry for my morning walk — its usage is mostly limited to making calls and texting in an emergency. I could take my iPhone when I step out of home for a walk and disable notifications, but then I always end up replying to WhatsApp messages and emails. I want to cut off from the outer world for some time. The Nokia 6310 not only reduces my anxiety but also makes me less concerned about phone notifications. 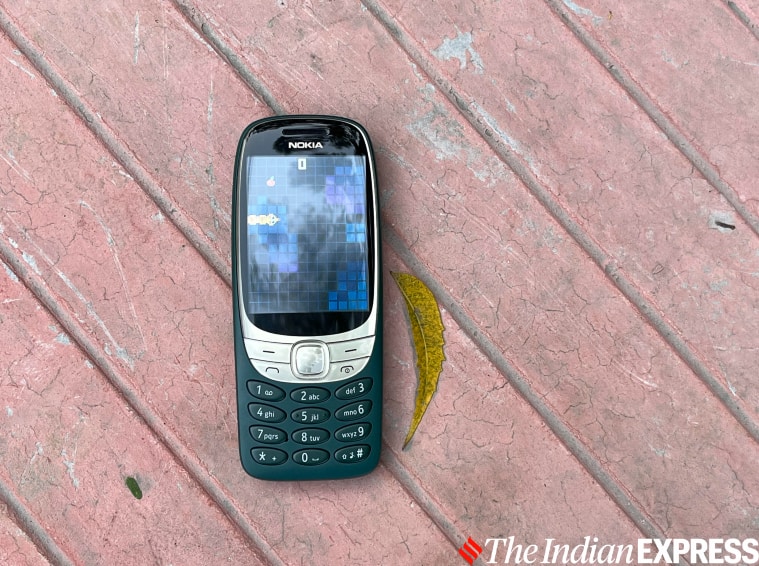 I use a Nokia 6310 for a purpose, and it works for me. But that doesn’t mean it also works in your case. It does not have 4G/3G, Wi-Fi, or GPS. But the phone is simple to use, menus are straightforward to navigate, and has a battery life of around 21 days between charges. It also includes FM radio, loudspeaker, comes with the iconic Snake game pre-loaded, and since there’s Bluetooth 5.0 for wireless headphones, it is easy to pair truly wireless earphones. My Samsung Galaxy Buds 2 work surprisingly well with the Nokia 6310.

You will find some basic apps on the device such as a voice recorder, calculator, stopwatch/timer, and calendar. Since it is running on Symbian, there is no access to modern apps or an app store. Facebook is pre-installed as well as Opera Mini internet browser that takes some time to open the webpage. The phone’s camera is just 0.3 megapixels, and it’s really bad by today’s standards. 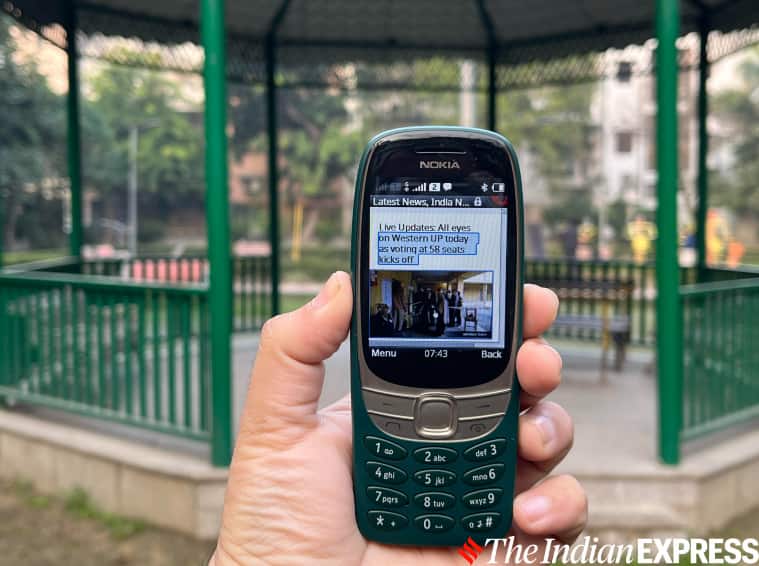 You can still open the browser and get access to the latest news or live cricket score. (Image credit: Anuj Bhatia/Indian Express)

Before you spend Rs 3,499 on the Nokia 6310, ask yourself what kind of relationship you have with your phone. In my case, I spend too much time on my phone and it is affecting my mental health. The Nokia 6310 is more of a detox tool and less of a phone for me. It has helped me reclaim my “Me” time, which I can use in a positive way. I am not endorsing a 2G phone in 2022 but I encourage you to think about life beyond social media and spend that time more with yourself. Get closer to nature, meet new people, read more, and put your smartphone down for a few hours.